Mordecai is the deuteragonist of Steven's rp Wiki. Mordecai is a member of the Heroes, and a former Irken Prisoner ; however, since his actions usually lead to disaster (having nearly destroyed the Earth during Operation Impending Hero I) his leaders, the Almighty Tallest, banished him to Planet Jail. While there, however, Mordecai heard of Operation Impending Hero II, and - obviously not understanding the purpose of his previous exile - "quit being banished" and ventured to Conventia in the hope of getting an assignment. Chagrined, the Almighty Tallest sent him on a "secret mission" to Danotor, in order to keep him occupied and away from the real Operation Impending Hero II. After arriving on Danotor, Mordecai enrolled in the nearest elementary Skool to begin his infiltration and gather information about the indigenous race. There, he became quick rivals with Chester V, an avid preteen Evil Founder.

Mordecai is a 23-year old blue jay. He made his debut in a non-canon short (Ten Minutes To Doom) as a human cashier, who then morphs into a prototype Mordecai-like character with a fanny pack. He later makes his first official appearance in the Pilot episode: The Heroes Begins. Mordecai is voiced by Steven Patro.

coming to their Relationship, they are best friends, but he gets a bit mad at him for telling him what to do, but in Invader Mordecai and some minor episodes, they temporarily enemies real quick, for example, Mordecai/Zim could be evil if they against him but they usually get along well and best friends.

there love interest begins.
in The Heroes Begins, They don't talk to each other yet but in the later episodes they did.
in The Movie, they can be powerful enough on Chester V even though he does (formerly) hate him.

Mordecai is really good friends with Gir. Whenever they are seen together, they tend to get along and have no problems. Along with Zim, they always seem to want to help Gir. For example, in "GIR Goes Crazy and Stuff," they try to help him with his stage fright, and in "Coke or Pepsi," they join him in his battle against Chester V to prove that they are not a loser.

Chester V is Mordecai's enemy at Danotor. Even though he fights at Mordecai and Zim a lot, it seems that Chester never gets angry at Mordecai on his own. Chester V recognizes Mordecai's greater sense of responsibility and self-control, things Zim doesn't have. In Steven's What?, thet seem to get along well ever since Chester V is a anti-villain.

Mordecai is fond of Dib, but doesn't consider himself to be attracted to him, but he did possibly ask to please join him in the episode "Yin Yang Zim", but it was just to make Zim Mad. In episodes like "Invader Cat" and "Job or Not" he said that Dib was just the male version of Zim's age.

Gaz and Mordecai are very good friends. Due to Gaz' knowledge of the unknown, Mordecai will occasionally go to gaz for help. Since Gaz doesn't be rude like Zim and even Dib, Mordecai has a lot of respect for her, never really yelling at her like he sometimes does to Zim and Dib. Mordecai considers Gaz to be very reliable.

The Night Master and Mordecai usually doesn't get along because they aee foes/nemesis and enemies, Mordecai does go terribly rude at him for cause any trouble than Chester V. Mordecai hates him so much in a episode "Night Falls".

Ms. Bitters don't communicate with Mordecai much, but she usually have his trust and respect. Even though Ms. Bitters doesn't slack off, Mordecai doesn't seem to mind because unlike Zim and Dib, they get their work done.

Mordecai dislikes Eradicus and Eradicus' Minions , and often tries to avoid them but not Bob. The main reason Mordecai's massive hatred for Eradicus and his minions is because they can be extremely killer-hated towards Mordecai, but they is unaware of this (rarely Bob), and thus continues to irritate him. However, on occasions, Mordecai can display sympathy for Eradicus, and this is especially seen in the episode Cheshire Zim. In addition, when Mordecai begins to be sensitive, he is usually kind to Eradicus, Bob and rubber Chucky.

His a cool, handsome Blue Jay bird who has some experience with his friends with his adventure but sometimes he can be lazy, busy (with f**king Margaret) and mostly Anti unhelping hero who lets Zim do all the work for him.

In Season 4, he seem smart, clever, somewhat cool and now heroic, he fights some enemies, which makes him more determined. He doesn't talk to Zim that much (sometimes especially his other friends), but in Night Falls when Chester V turns into a good guy, he can be respective with him. He can also do some action and occasionally mad with violent (like Yang). 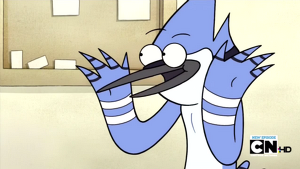 The gallery for Mordecai can be viewed here.

Retrieved from "https://stevens-rp.fandom.com/wiki/Mordecai?oldid=5817"
Community content is available under CC-BY-SA unless otherwise noted.